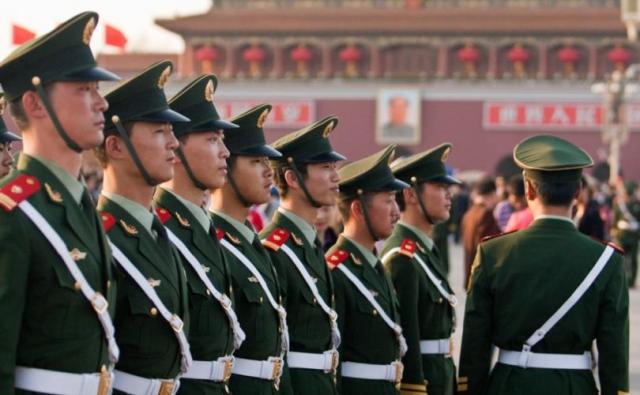 In a recently released clip from inside a Chinese police station, a lone man sits strapped into a metal-cage-like contraption that looks like it is meant to subdue a wild animal, but is actually used for the interrogation of ordinary citizens.

With downcast eyes and a timid voice, he softly answers a series of questions from his interrogators, apologizing for drinking “a bit too much” and speaking “nonsense.”

“Nothing wrong with that,” the man feebly responds.

At the end of the video, after repeatedly expressing his sorrow for his “crime” in response to multiple demands by the interrogators to explain himself, the man makes a final plea for mercy.  With a bow of his head, he solemnly declares, ““Uncle Police I’m so sorry.  I’m wrong.  I know that now.  Please forgive me.  I won’t do it again.

Interrogations like these are now becoming a routine part of life in China.  With no civil rights and an encroaching regine that monitors every aspect of daily life, ordinary citizens like this man know that if they say something on social media that the government doesn’t like and say the wrong thing to police, they could end up in prison, tortured, or killed.

But this is just the tip of the iceberg of the human rights atrocities and abuses that the Chinese communist Party (CCP) is perpetrating against its own people.  Here is a brief list:

As we have written about previously, the CCP is forcibly harvesting the organs of religious minorities to fuel an organ industry to the tune of $10 -$20 million, which provides up to 85 percent of the world’s organ transplants  (more on that later ((Life Site News)) )

The CCP has been persecuting and executing the traditionally Muslim Uyghurs since at least the 1990s.  Today over 1.5 million ethnic Uyghurs are currently imprisoned in what the CCP calls “concentrated education and training schools,” in which detainees are subjected to indoctrination sessions, torture, sexual assault, and execution.

The CCP continues to mandate the number of children couples can have, which recently changed from a one-child to a two0child policy  This system is enforced through exorbitant monetary fines, forced abortions, and forced sterilizzations.  It is estimated that theyere have been more than 330 million induced abortions in china since the one-child was first implemented in the early 1980s.  A significant (but unknown) percentage of these abortions were forced.

The CCP is implementing a “social credit system” that rates the behaviour of Chinese citizens so that their ranking fluctuates up and down.  Depending on your score, you can be banned from buying plane and train tickets, your children can be banned from attending the best schools, you can be denied jobs, and you can be publicly named a “bad citizen” among a host of other injustices.

As these human rights atrocities and abuses illustrate, China is in fact a criminal state.  The final report compiled by the China Tribunal which amassed definitive evidence of forced organ harvesting that has happened and is currently happening in China makes this conclusion:

Governments and any who interact in any substantial way with the PRC (People’s Republic of China) including:

Should now recognise that they are, to the extent revealed above, interacting with a criminal state.

Family Research Council  FRC  could not agree more.  Organizations like the NBA, Hollywood, and other industries that have conveniently ignored the human rights atrocities and abuses committed by the CCP for financial gain must answer to the fact thatt they are dealing with a criminal state.  And as we have repeatedly pointed out,the United States must address these atrocities and abuses in its current and future trade and diplomatic dealings with the CCP.

Why No Nuremberg Trials For The Communists?  The reason is well pointed out in the above paragraph.  The complicity of Hollywood, the US Government in ignoring Joseph McCarthy, the NBA and those who say “So What?” …  yes the complicity and protection  on their part is advancing the Communist ideology.

Nazi officials were hung at Nuremburg.  Communist officials who torture, imprison, brainwash their brethren go scot free about their business because the world turns a blind eye.

And then  … there is Pope Francis and Cardinal Theodore McCarrick who shake hands with the commies and turn their brethren over to the police state without blinking an eye. Communism is advancing upon the world . Shame upon you all!  haurietisaquas