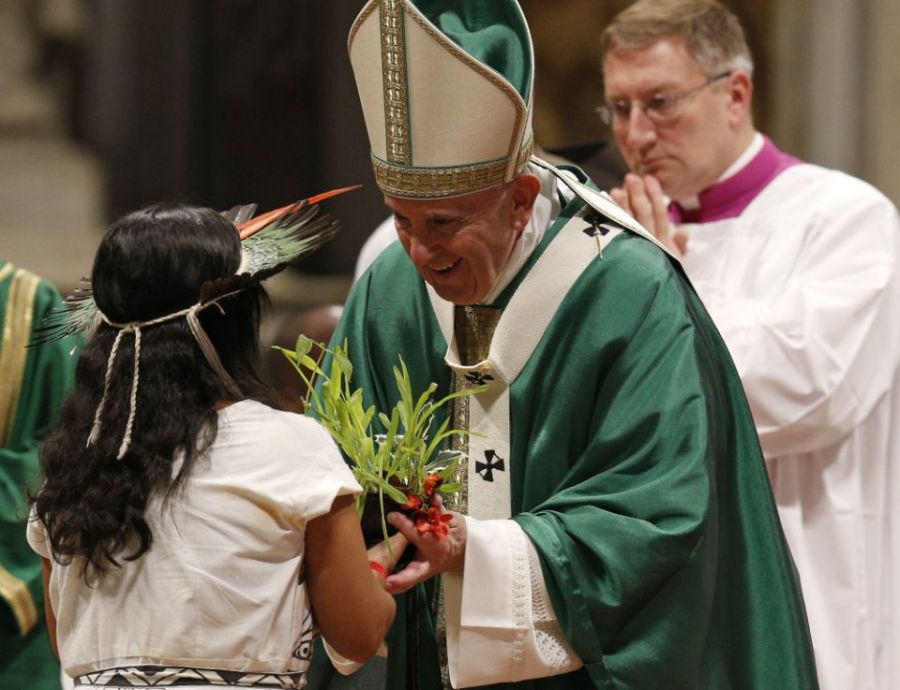 There is “divinity present in the Amazonian soil” said Ednamar, the indiginous woman.  Pictured is the plant given to Francis at the Offertory of the closing Mass of the Sin Nod, a false god bowl of dirt with “divinity” in it).  It being placed on the altar of God.

Is it “the abomination of desolation?”

Rome, November 8, 2019  Life Site News.   The female indigenous leader who planted a tree alongside Pope Francis in the Vatican Gardens ahead of the Amazon Synod was clear about the syncretistic and pagan meaning of the act.

She explains:  It was intended to “satisfy the hunger of Mother Earth and reconnect with the “divinity present in the Amazonian soil.”

In an October 4 statement that went under the radar during the Synod itself, Ednamar de Oliveira Viana of the Maues region in Brazil, says of the Vatican Garden tree-planting ceremony:

“To plant … is believing in a growing and fruitful life to satisfy the hunger of Mother Earth’s creation.  This brings us to our origin by reconnecting divine energy and teaching us the way back to the Creator Father.”

Francis deliberately desecrated the altar of St. Peter’s with demonic dirt.  Sacrilege marched upon sacrilege led by a Sherman Tank with the man who governs the Catholic Church in its’ drivers seat.  It is obvious that he wants to destroy the Church.

Francis carries the witches stang into the previous Youth Synod.  How many young people were influenced by demons this time?

Thank you to the Cardinals and Bishops who have spoken up ?  God Bless you!

But where are the rest of you?

If only … If only … the prior Popes had obeyed Our Lady of Fatima and consecrated Russia to the Immaculate Heart of Mary.

Pope Pius XII actually did.  But he didn’t know about having the Bishops.  He hadn’t read the Third Secret as he died before 1960, the year it was to be opened.  He was a man of obedience.  Back then it meant something.