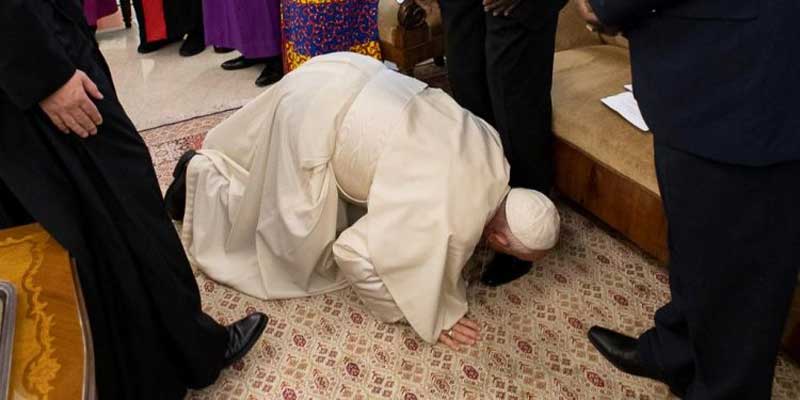 The Papal document ‘On Human Fraternity,’ recently put forth by Pope Francis, actually professes that each is free to profess the religion he likes and even not to profess any at all.”

“On February 4, 2019, at Abu Dhabi, Pope Francis and the Grand Iman of Al Azhar, Ahmad Al-Tayyeb, signed the document on ‘Humanity Fraternity for World Peace and Living Together.’

The declaration opens in the name of a God, who, if he has to be a God common to all, cannot be anything other than the Allah of Muslims.

The God of Christians, in fact, is one in nature, but Triune in persons, equal and distinct, Father, Son and Holy Spirit.

Since the time of Arius and thereafter, the Church has been battling the anti-Trinitarians and the Deists who deny, or set aside, this mystery, which is Christianity’s greatest.

Islam, on the contrary, rejects it in horror, as the Sura”of authentic worship” proclaims: “He, God, is one God, the Eternal One! He will not generate, nor was He generated…

Actually, in the Abu Dhabi declaration, worship is not given either to the God of Christians or to the God of Islam, but to a secular divinity,  “human fraternity, which embraces all men, unites them and renders them equal.”

We are not dealing here with the ‘spirit of Assisi – which in its syncretism recognizes, nonetheless, the primacy of the religious dimension over that of the seculist – but with an affirmation of indifference.

In no point, in fact, is a fundamental metaphysic of the values of peace and fraternity mentioned, but these are continually referred to.

The document, when it affirms that:  “pluralism and the diversity of religions, color, sex, race and language are willed by God in His wisdom, through which He created human beings,”  does not profess the ecumenism condemned by Pius XI in ‘Moratalium Animos, (1928), but the religions indifferentism,   condemned by Leo XIII in the encyclical Libertas (June 20, 1928),   which he defines “as a doctrinal system teaching each is free to profess the religion he likes and even not to profess any at all.”