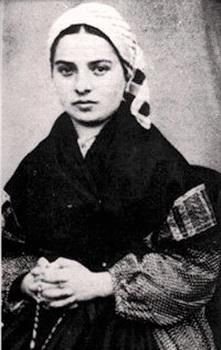 From the 1903 Book ‘The Blessed Virgin in the Nineteenth Century’ by Bernard St. John          Scholar Selection

This article concentrates strictly on the supernatural appearance of Bernadette Soubirous when she saw the Blessed Virgin and spoke with Her.   It is indeed very moving.   This aspect seems to be missing in other books.

Bernadette’s mother had forbidden her to go to the Massabiele, but the longing within the girl became so intense that her mother relented.  It was Sunday. Her sister Marie and Jeanne Abbadie were her companions as before.  They were quickly joined by others.

“The favored child was on her knees, rosary in hand, looking up at the niche.  “She is there!  She is there!  The other girls fell on their knees.  Bernadette was soon wrapt from the world around he. Her  attitude bespoke adoration;  her countenance became illuminated with a supernatural joy.  The girls on either side of her were deeply impressed with what they saw.  Some began to weep.  “Oh, if Bernadette should die.”

The next morning, at dawn, Bernadette, her mother, and her mother’s sister set out for the shrine. Other young girls joined them.  In a few moments Bernadette exclaimed: ‘She is coming.  She is coming.  ‘Her small frail body quivered with delight.  She bent her forehead to the ground.  As she looked up the other girls looked up, following her gaze. All they could see was the wild rose bush growing out of the opening in the rock.  Their only glimpse of heaven was what they saw on Bernadettes face. Bernadette that day gave no outward sign of ecstasy.  As she continued saying the rosary in concert with the others, her face at intervals was irradiated by smiles no human words could describe.                                       . 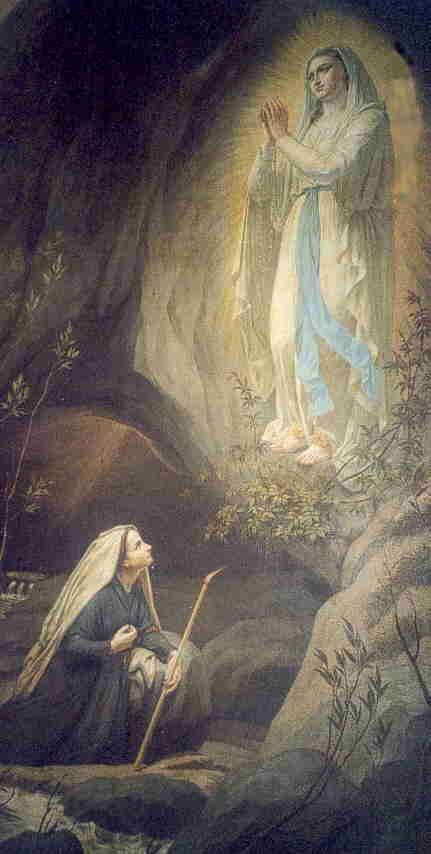 The next morning at dawn a party of three set out from the Soubirous  house. Others joined them urged by curiosity.  All met at the Roches Massabeille.  There Bernadette knelt down at her usual place and looking up at the opening in the rock, made the sign of the Cross and began saying the Rosary.  Almost at once the smiles that began irradiating her face, and her forward-bent attitude, told that she was already wrapt from this nether world.  Lookers-on understood that the apparition was here.  Neither the mother or the mothers sister were prepared for what they saw.  The two women thrilled  and trembled  at the superhuman beauty of the child in ecstasy before them.  then the mother exclaimed:  “O God! don’t take her away from me!”

On the following Sunday, thousands were before her at Massabielle, awaiting her arrival.  She was poorly but neatly clad, with the graceful capulet of the Pyrenena regions covering her head and shoulders.  This capulet was white.  She went down to her usual place as if unconscious of the crowd.  Kneeling down and taking out her rosary, she began saying it.  Almost at once her face, looking up at the aperture in the rock, became as one transfigured.  Its beauty and its joy were not of earth.  The eyes were fixed, the lips parted and the whole countenance illumined.  There was someone near Bernadette, watching her closely.  This was Dr. Douzous, one of the most prominent of the medical men of Lourdes.  His object was  to study the little girl from life, and thus be able to come to some conclusion escaping the phenomena being exhibited in her person.  Until then he had been a freethinker (Freemason)  His presence at the Grotto that morning was to make him a Catholic; and, moreover, one of the foremost apologists of the Lourdes apparitions.”

The Catholic Church is the most powerful supernatural force in the world.  Why did Vatican II eliminate this beautiful part of our Faith.  In truth of fact … if there is nothing supernatural ( according to the revolutionaries in the Church ) why is there a need for faith?

St. John tells us about miracles and wonders:   “There are many more things that Jesus did, which , if everyone of them were written down, I suppose not even the world itself could contain the books”  John 21-25