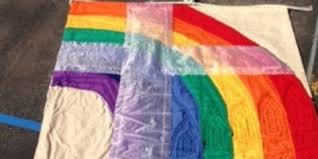 Parishoners of Resurrection Church, Avondale, Chicago burned this  flag with the rainbow colors signifying LGBTQ,  overlaid with a transparent Catholic Cross.  And all hell broke loose!

The current pastor, Rev. Father Paul Kalchik had planned to burn the flag, which gives conflicting ‘faith’ signals, and had published the date in the church bulletin.

This is what he wrote:

“On Saturday, September 29, the Feast of Saint Michael, Gabriel and Raphael, we will burn, in front of the church, the rainbow flag that was unfortunately hanging in our sanctuary during the ceremonial first Mass at Resurrection parish.”

A footnote on his announcement stated, “U.S. Church homosexual scandal is a sequel to the story of Sodom and Gomorrah.”

Father Kalchik, himself, was the victim of abuse twice in his life and is still being treated for PTSD   (Post Traumatic Stress Syndrome)  He is a very well loved priest by his parish according to sources I have sought information from.

Now, why should all this cause a disturbance?  It has.

This has caused the LGBTQ community much trouble. They have had to protest on the sidewalk … bringing along their small children.

Cardinal Cupich, who is close to Pope Francis,  ordered that the flag not be burned. 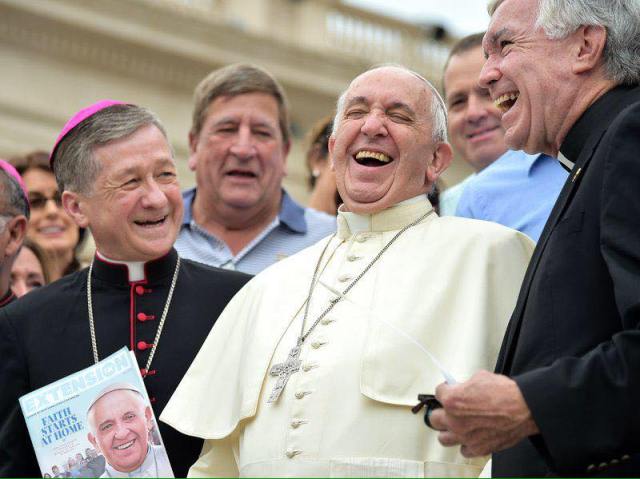 Parishoners then took it into their own hands and burned the flag.  Nonetheless, it appears that Cardinal Cupich will carry out the punishment.

Father Kalchik will be ordered to undergo psychotherapy, and, he will not be moved, as he had been planning on,  from Resurrection Parish to one which is close to his parents. Whether or not the priest will be seeing two psychotherapists remains to be seen.

The United States Conference of Catholic Bishops (USCCB) has this to say on the display of flags in Catholic Churches:

“The origin of the display of the American flag in many parishes in the United States appears to have its origins in the offering of prayers for those who served during the Second World War (1941-1945).  At that time, many Bishops and pastors provided a book of remembrance near the American flag – requesting prayers for loved ones – especially those serving their country in the armed forces – as a way of keeping before the attention of the faithful the needs of military families.  This practice has since been confirmed in many places during the Korean, Viet Nam and Iraqui conflicts.

The Bishops Committee on the Liturgy has in the past encouraged pastors not to place the flag within the sanctuary itself, in order to reserve that space for the altar, the ambo, the presidential chair and the Tabernacle.  Instead, the suggestion has been made that the American flag be placed outside the sanctuary, or in the vestibule of the Church together with a book of prayer requests.

It remains, however, for the diocesan Bishop to determine regulations in this matter.”