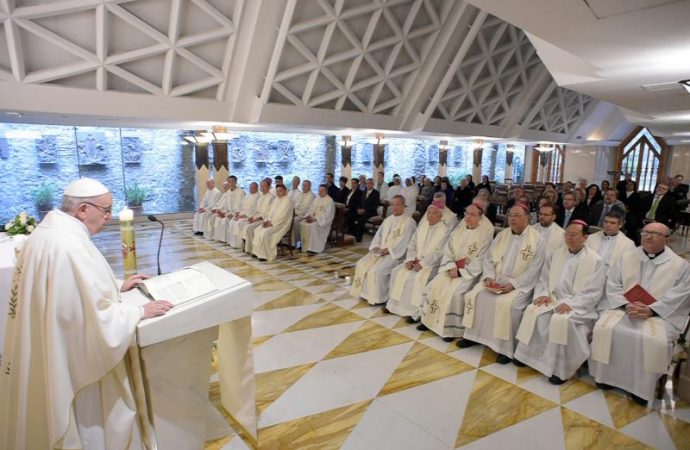 Photo: Quiet Francis      Story From:  Church Militant and Letters From Inside the Vatican by Dr. Robert Moynihan   see at: ChurchMilitant.com   Sept. 7, 2018

Vatican officials are on the hunt for Abp. Carlo Maria Vigano.

According to sources within the Vatican, the Secretariat of State of the Holy See – under the direction of Pietro Cardinal Parolin – has communicated an instruction to its internal and external security services to use its “intelligent resources” to locate the physical whereabouts of Abp. Vigano.

This request has been commnicated not only in order to prevent more unpredictable damage to the image of Pope Francis and the Holy See on the world stage, but also to “prerpare the terrain” for the former apostolic nuncio-turned-whistleblower to be prosecuted for alleged multiple crimes against Vatican and Church law.

The urgency with which the location of Apb. Vigano is being sought is all the more palpable since, according to canon 1507 of the Code of Canon Law and other procedural and penal norms of the Holy See and Vatican City State, Abp.  Vigano cannot be prosecuted or even punished unless he first be given the opportunity to be officially notified in writing of the specific canonical and Vatican crimes he is alleged to have committed and be given the opportunity to defend himself against them.

As first reported by the very well informed Baron Roberto de Mattei (Correspondenza Romana, September 5), criminal counts are said to be in the process of being researched for Vigano having allegedly committed perjury for his having breached pontifical and other forms of state secrecy in violation of, among other norms, the Instruction Secreta continere on the Pontifical Secret issued on February 4, 1974, by Jean Cardinal Villot, (list of Pecorelli) Secretary of State of the Vatican.

The specific Norms of Secreta being researched for applicability and evidence in support of potential prosecution include:

News of the Vatican deploying its vast international resources to track down and prosecute Abp. Vigano are consistent with his assertions made (veteran Italian Catholic Vaticanist)  Aldo Maria Valli on their final encounter:  that ” Vigano had purchased a plane ticket” and that he was “traveling abroad”,  that he “could not tell (Valli) where”, that Valli should “not try to find him” – that his “old cellular number will no longer be functioning” and that they “saluted one another one last time.”

Vigano, in saying goodbye to Valli, appears to have known exactly what the worst elements of the Vatican and its agents are capable of

Le us hope he has taken every necessary precatution from falling into the hands of those who would wish him ill.

In other words, everything he said was true.  Let us all pray for his physical safety and his emotional well being.  We love you Cardinal Vigano!!   maryanne