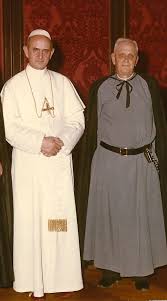 Father Gerald Fitzgerald, founder of the Servants of the Paracletes, an order established in 1947 to deal with problem priests, wrote regularly to Bishops in the United States and to Vatican officials, including the Pope, of his opinion that many sexual abusers in the priesthood should be laicized immediately.National Catholic Reporter 3/30/2009

Father Gerald, a dear friend of my husbands family, who lived on Broad Street in Weymouth, MA, was supported by my in laws in any way they could help, with joy in their hearts.  Many the dinner he was invited to and many the stories of the faith he told to the four boys.  How much more of a blessing could I have had than to marry one of these four boys, which I did.

Father Gerald, after his seminary days at St. Johns Seminary and then ordination and working as a parish priest, one evening as he sat in the rectory kitchen heard a knock on the door.  He opened it to see a thin scraggly man, hat in hand, who asked for something to eat.  As the hungry man talked with Father after they both at supper, Father learned that the man was a priest.  It struck him and stayed with him.

It was still a song in his heart when he returned from his time as Chaplain.

He founded an order,  The Servants of the Paracletes, to help priests with problems.  He still had the beggar priest in his song of life when he spoke:

There is no one in the world so poor who dies, not understanding how rich he is”  (To the Handmaids of the Precious Blood”  …   This is an order of nuns which he founded.

Father Fitzgerald’s convictions appear to significantly contradict the claims of contemporary Bishops (and Cardinals) that the hierarchy was unaware until recent years of the danger in shuffling priests from one parish to another and in concealing the priests’ problems from those they served.  His correspondence about matters had been court sealed .  He was a prolific correspondent who wrote regularly of his frustration with and disdain for priests “who have seduced or attempted to seduce little boys or girls” His views are contained in letters and other correspondence that have been made available to National Catholic Reporter by a California law firm in February.

Not only did the church know there were pedophiles among the priests, but the Catholic Church hierarchy had been well educated in pedophilia by Father Gerald Fitzgerald.  Documents are available which show that bishops were touring ‘Via Coeli’ , (the name given to his “little monastery” treatment center in Northern New Mexico, and sending pedophile priests there, beginning in the 1950’s.  Pictures and Records are available:

A “follow-up” letter from Pope Paul VI Vatican acknowledged a meeting with Father Gerald (see featured picture of the meeting) with the Vatican reply in part:  “… but we must also consider the needs of the church …”   re: the discussion about laicizing.  Documents “here (BishopAccountability.org) show that Via Coeli and its work with problem priests was kept secret from the parishes.”  Many priests were went to Seton Institute in Baltimore, Md.  I know that because I was an 18 year old Student Nurse there, though we weren’t told why some of them were there.  It was there also, before my time, that A.W. Richard Sipe of Boston fame, studied psychotherapy.   The ’12 step program’ and talk therapy treatment concepts defeated Father Fitzgerald’s spiritual “supernaturalizing” approach with priests.  but isn’t our Catholic religion the most supernatural power on this earth?