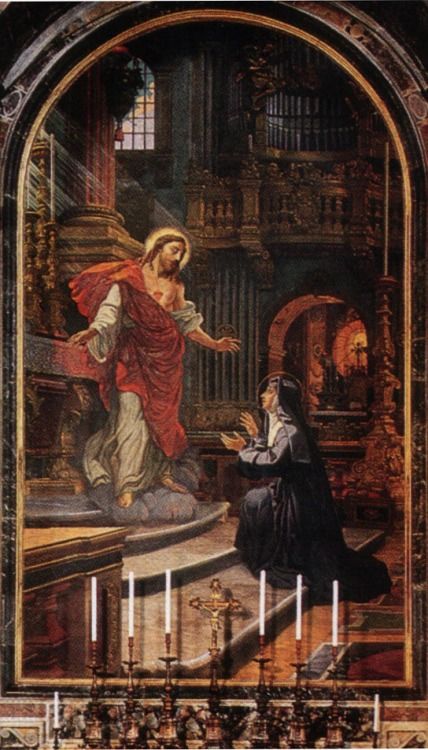 If only King Louis XIV had asked questions when he had heard the rumors about some Sacred Heart messages for him …through a visionary at Paray-le-Moyal. The King  had already been communicating with St. John Eudes.  He was growing older and weaker at this time.

But only Father Le Chaize, the Confessor of the King, to whom St. Margaret Mary Alocoque had sent a letter, in which was written, for the king,  the exact requests of the Sacred Heart knew.  Father Le Chaize,  failed to give them to the King. His reasons were fear of his superior.

His Superior … in the Jesuit order …  was hostile to the events occurring in Paray-Le-Moyal.   Father Le Chaize was a good Priest.

His Superior had already chastised severely another Jesuit, Father Croisset, for writing about the apparitions and propagating them.

The chain of events could have been so different.  Even to this day.  The letters of Margaret Mary can be found in Google transcribed e-archives.

Here are some of the letters from St. Margaret Mary which Father Le Chaize had:

“Inform the eldest son of my Sacred Heart that he will secure his birth into grace and glory by the consecration he will make of himself to My adorable Heart … and through his mediation, that of the great ones of the earth.  He (the Sacred heart) wishes to reign in his palace, to be painted on his standards and to be graven on his arms to render them victorious over all his enemies, by bringing these proud, arrogant heads under his heel and effect his triumph over all the enemies of the Church.” This was to include Freemasonry which was rearing it’s head.    From:   Utopia Nowhere by Solange Hertz 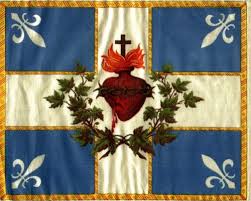 This is the Canadian Flag which flew for a time with the Sacred Heart emblem.

Our Lord had desired a a building to be erected in which would be displayed an image of the divine Heart, in  which the King and his  court could formally consecrate themselves. 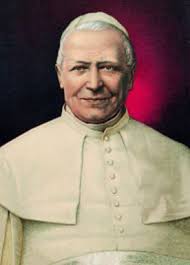 It was not until the reign of Pope Pius IX that a formal cultus was established to the Sacred Heart of Jesus. ”

France was hurtling towards the reign of terror!

SIMILAR REQUESTS WERE MADE TO THE PAGAN EMPEROR CONSTANTINE LONG AGO.    HE LISTENED.   The Message from God runs along a similar vein as King Louis XIV’s messages had:

Constantine Sees a Cross in the Sky:   “Amidst the fiercest and most general persecution the Church has ever known, God, who sets bounds to the fury of the wildest storm, had decreed the triumph of His Church over the powers of the world.  Diocletian was Emperor of the East and Maximian of the West.  In the year 303 the former published at Nicomedia an edict, in which he commanded the churches to be pulled down, and the holy scriptures to be burnt.  Maximian had already preceded him with characteristic ferocity in the West, where the persecution had long raged.  Torments previously unknown were employed to intimidate the Christians.  They were suspended by the feet over a slow fire;  they were stripped naked, and with a fork stuck through one leg,  left to expire by lingering torture;  sharp reeds were thrust beneath their nails;  their flesh was scraped from the bone with broken pots, and molten lead poured into their open wounds.

The young new Emperor was about thirty one years of age, of handsome form, with good abilities, and a wisdom in advance of his time.  He was a pagan.  He offered sacrifice in the temple of Apollo, probably at Autun in France. 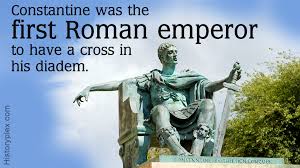 Maxentius, the son of Maximian, desiring to subdue the whole West to his obedience, declared war on Constantine, and sought to secure victory to his arms by practicing the most cruel and abominable superstitions.  Constantine, whose forces were far inferior to those of his adversary, feeling the necessity of aid from on high, bethought him of the Christians’ God, and prayed that He would reveal Himself to him, and give him victory in the battle.  His prayer was heard.  At noonday, while he was marching at the head of his army, a cross of fire was seen in the calm and cloudless sky, and on it these words:  In hoc signo vinces – “Through this sign thou shalt conquer.”  It was visible to the entire army. 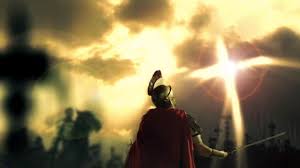 During the night our Lord appeared to him and commanded him to make a standard like the cross he had seen, and to bear it at the head of his troops.  Accordingly he caused one to be made of costly materials, covered with gold.  On its top was a regal crown blazing with jewels and bearing the first two letters of the word Christ. 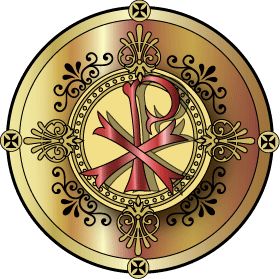 It was called The Labarum.  Chi Rho (Gr. Christ)

Fifty of the bravest soldiers were chosen to guard it and bear it by turns.  Constantine, meanwhile, sent for Christian bishops.  He inquired of them the meaning of the vision he had beheld, and received from them an exposition of the doctrines of the faith.  Then, confident of the Divine protection, he marched to Rome , where he attacked and utterly defeated the tyrant maxentius, who was drowned in the Tiber while attempting escape. 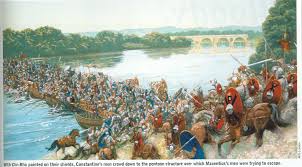 Constantine marched to Rome and she opened her gates as he entered in triumph.  He did not at once become a Christian, or even a catechumen.  He published an edict of toleration; and although he does not appear, in the first instance, even to have contemplated the abolition of paganism, nevertheless he placed various restrictions on its exercise, forbidding the abominable sacrifices performed in private dwellings, and afterwards demolishing certain of the temples where immoral rites were practiced.

He recalled the Christians who had been banished, restored the churches, enriched them with magnificent ornaments and vessels, honoured the ministers of religion and conferred upon them special privileges.  He gave the Pope, who had been the special object of hatred and persecution, the palace of Lateran, and turned an adjacent palace into a church.  This is the beginning of the patrimony of St. Peter;  it is now the church of St. John Lateran.

Down through the ages, we have had apparition after apparition.  Approved by the Church.  And then, apparently, put in mothballs like La Salette and Fatima which proclaimed our destiny to us if certain instructions were carried out.  They were not.

The tsunami which approaches our beautiful Ship of State is the Popes doing and it is perilous in our eyes …..