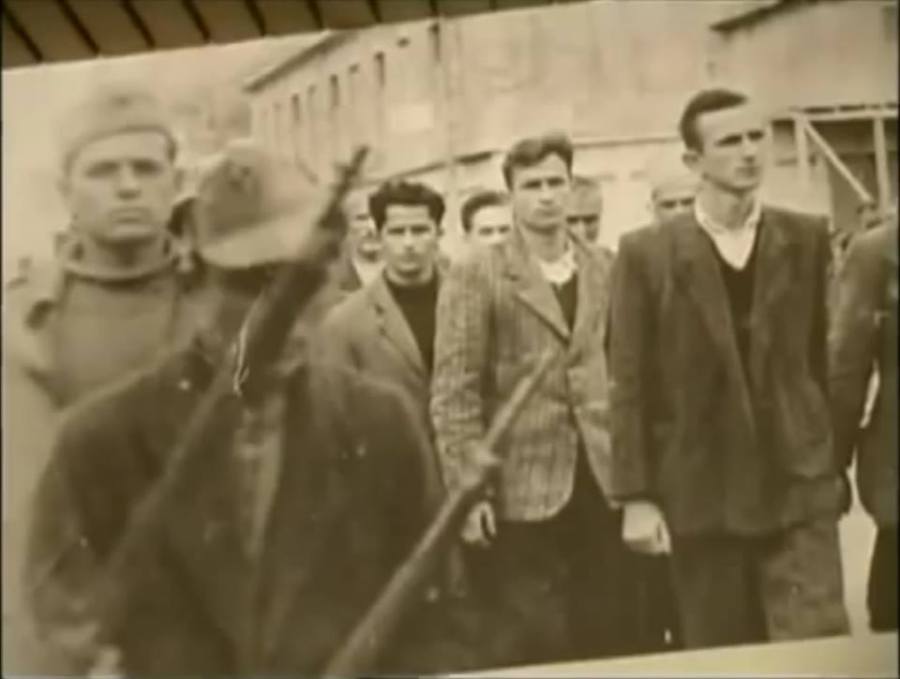 There are 3,600 internees in the Telelene camp, which was established in the beginning of 1949 and is the oldest and largest in Albania, and 2,000 in the Beden camp in Kavaje.  About 70 percent of the internees in Telelene are women and children.  The highest death rate is among the children.  The following (Xherxhe?) from Koplik, the small child of Zef Mirasa from Bajze, the year old son of Fran Hasa from Bajze, two children of Prenash Djerdje (Xherzhe?) from Ljohe, and the three children of Djuste )Xhuste?) Gora, who were 10 years, years, and 6 months old.

The camp commandant is Lt. Dzafar (Xhafar?) Pegaci.  He is an ignorant villain and tyrant who has forcibly raped young and pretty women who have refused to become intimate with him.  He loves to see children  die.

The internees in the Tepelene camp sleep in four rows of double deck wooden beds.  Families are not separated.  The building has no garret (no insulation between the ceiling and roof?)  The camp provides a wooden bed and a small piece of soap monthly.  The daily food consists of tea for breakfast and warm broth and 650 grams of bread for lunch and dinner.  No bedding of any kind, clothing, footwear, or other food is furnished.  Nothing additional is given to even the youngest children.

The camp does not have a regular doctor.  One doctor makes visits irregularly.  Only those who are at the point of death are sent to the hospital in Gjinokaster.  There is no emergency medical service.  More than 50 persons died in the first half of 1951.

Both males and females in the camp work without pay throughout the years, in all kinds of weather even on Sundays.  They work on the railroad at Elbasan and on constructing the railroad in Vlore.  They cut wood in the mountains near Tepelene and do various construction jobs in the camp itself.  Work quotas are set.  In forestry, the quota calls for the cutting and stacking of cubic meter of wood (per word day?).  A man’s job is finished only when his quota is fulfilled, which means that the weak must work longer hours including at night.

The Albanian concentration camps in Isul, on the Fort’s Palermos peninsula and Cepi Panarmos are old Turkish fortresses with very thick walls and small windows.  The interiors, including the floors, are of stone.

In the semidarkness of the Isul fortress, internees are exposed to the elements  (walls are rain soaked and constantly damp). and many become sick, especially with eye trouble.  Work lasts from 12 to 16 hours, and the guards carry whips.

The internees There is considerable sickness in the Beden camp, located in a swamp in Kavaje.  Tuberculosis is the most prevalent disease.  The camp commandant has established special tuberculosis brigades of 80 men each, who are forced to work, although many of them frequently die while at work.  Iso Metot from Shkoder died in this manner.  This is all part of a deliberate plan, as was shown in a lecture given by the camp commandant.  He said internees were in the camp as enemies of the government and must die there.

Slightly more than two years ago, Jak marko, a policeman, killed Zef Kolj Prencija, president of the youth organization for the  Burbullush region.  The following day, Metus Bogo, a state security officer from Shkoder, praised the killer at a People’s Meeting.

The reason given for the killing was the victim’s sympathy towards Yugoslavia.

The authorities also killed Sokula Bajrama, member of the Albanian Communist Party, for saying at a party meeting that all of the clamor against Yugoslavia was untrue.

A 12 minute documentary from former prisoners can be viewed on You Tube: