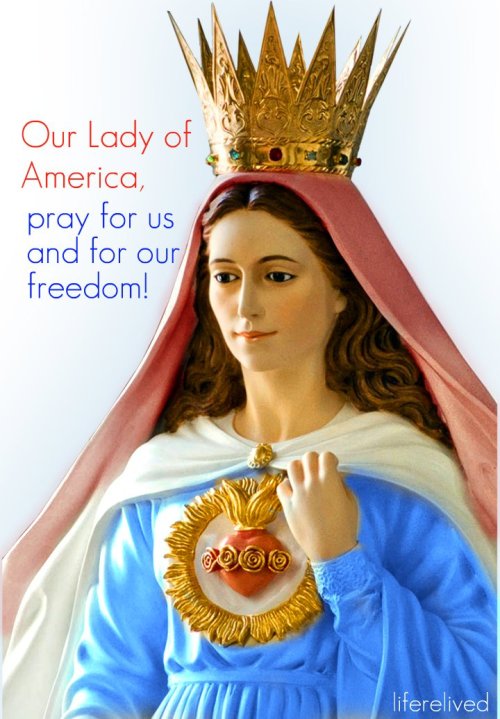 Our Lady wants we the people to pray. Why can’t we have her in our Basillica?  What is the reason, dear Bishops of America?  Her messages are approved! by Archbishop Paul Liebold.  She wishes her statue to be placed in the National Shrine of the Immaculate Conception in Washington, D.C.  Perhaps the reason she is not there is because for the past more than twenty years, Shrine has been administered by ex-Cardinal Theodoe McCarrick, followed by Cardinal Donald Wuerl.

Cardinal Burke had her statue brought to a USCCB meeting in Washington, and explained to the Bishops what Our Lady wanted.  Her statue was brought by the Fire Department from the meeting to the Basillica, and, processed in and out.  Father Angelo Mary Geiger, F.I. arraged this, and, spoke about her in the Basilicca.

“I desire, through my children in America, to further the cause of faith and purity among peoples and nations. I will teach them to become pure like to my heart …..”

What would America be like today had she heeded the words of Our Lady who appeared to Sister Mary Ephrem (Mildred Neuzil)  She promised the gift of purity.  She promised greater wonders than those of Lourdes and Fatima.

Canonical Approval:  Archbishop Leibold , Cincinnati Ohio,approved the apparition in a letter dated May 31, 2007.  He gave his Imprimatur to the revelations from the  Blessed Virgin Mary under her title of ‘Our Lady of America’

And we missed out!  The statue is not enshrined yet in the Basilica where her beautiful presence would  be a constant reminder of her promises to America for the people who stream by and stop to say a prayer at her shrine in the Basilica.

Sister was born in Brooklyn, N.Y. on August 2, 1916.  In 1929 she entered the Sisters of the Precious Blood in Rome City, Indiana.  In 1959 she became a contemplative of the Indwelling Trinity in Fostoria, Ohio.  In 1938 she began to have mystical experiences during which Our Lady appeared to her with messages for her children in America.

She revealed to Sister the image as pictured, and, messages that continued until she died in her convent on January 10, 2000.  She was 83.  Our Lady asked that her statue be made according to the likeness she gave to Sister, and, that it be then solemnly carried in procession, in the Basilica of the National shrine of the Immaculate conception in Washington, D.C. and enshrined there.

Our Lady wished to be honored there in a special way as “Our Lady of America, the Immaculate Virgin”

On November 11, 2006 the United States Bishops re-consecrated the country to her.

The blessing occurred precisely on the 50th anniversary of the request that Our Lady of America had made on November 15, 1956, in which she asked to be placed in and honored in the National Shrine.

Archbishop Richard Garcia of California had said:  “To have the enthronement of Our Lady of America statue is a timely testimony to us all of the blessing Our Lady is for all of us who live in the United States of America.  Our Lady guides and protects us in this critical time of our history when we need to value even more closely what she as a Mother has taught us:  to hold Christ in the center of our lives and to value the family and its unity, and, to do the will of the Father and to evangelize by pointing others to Christ.

Later Bishop Garcia said:  “Our Lady of Guadalupe is important for all the Americas but to have Our Lady of America and the Immaculate Conception as a special patroness for our nation will bring about the peace we so yearn for and will be a resolution to many social issues, including euthanasia and abortion.

Marian devotions, including those to Our Lady of America, can also lead the faithful to really listen to Christ’s message that all must be bearers of the Gospel and bring about Christ’s love.”

Our Lady promised that greater miracles than those granted at Lourdes and Fatima would be granted here in the United States, if the people responded to her requests.

Let us pray that the U.S. Bishops honor Our Lady of America’s request soon and place her statue in the National Shrine as a safeguard for our country.

FOR MORE INFORMATION VISIT THE OFFICIAL WEBSITE OF OUR LADY OF AMERICA:       www.ourladyofamerica.com

12 thoughts on “Our Lady of America: When will A few American Bishops Put Her Image in The Basillica in Washington, D.C. ?”