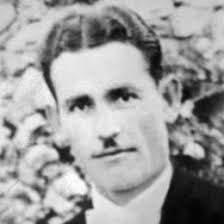 From the Collection   ‘Socialism Kills’   By Theresa Marie Moreau

He had been arrested three months earlier, he had endured horrendous torture, and was given the death sentence on February 22, 1946, because of his Catholic faith, in Communist Albania.

A member of the laity, he left  behind his widow and infant son, Gasper, whom he had never met or held, born three months after his execution.