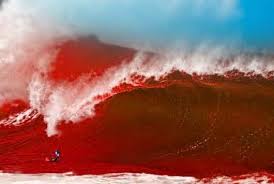 Interpretations from:  The Book of Destiny by Rev. Bernard Haring Kramer 1950 edition

The Book of Revelation  as interpreted by Father H. Bernard Kramer in 1953 after 30 years of studying this mysterious book, and, learning 7 languages. 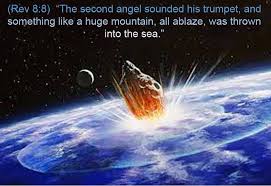 “St. John, still in the spirit (of prophecy), on the Lord’s Day, continues recording what he is seeing in heavenly visions.  The mind, heart, and character of John were eminently qualified to receive these revelations.  The great prophets of the Old Testament had received only glimpses of these and similar visions.  But since St. John was spiritually and morally far superior to the ancient prophets, his qualifications made him worthy of receiving the complete revelations which the prophets received only in fragments.”     Father Herman Bernard Kramer

“At the sound of the second trumpet, a burning mountain is seen by the seer.  The entire mountain is a mass of fire.  It is then hurled into the sea and turns the water of the sea into real blood.  So much blood is produced that one third of the creatures who have life (souls) in the sea die.  This allegory forebodes something which is aptly clothed in the figure which John sees.”

“If the sea were actually changed into blood, all living creatures in the sea would die, as in the first plague of Egypt.  The fire is the element that converts the third part of the sea into blood.  If a mere fire were cast into the sea, it would be extinguished at once.  This could then be only a metaphorical fire.  In other parts of the Apocalypse it represents hatred.   Here too.

One third of the creatures (souls) die in the fire when the burning mountain turns it into blood.  This effect is an allusion to the first plague of Egypt.  However, the figurative concept of the whole chapter makes us seek an allegorical interpretation.

These creatures who die are rational, are human beings, and therefore probably die a spiritual death.

The two verses take in view the Mediterranean Sea as the physical embodiment of that sea which is the human race.  (See XVII.15) or the nations of Asia or Africa bordering on the Mediterranean.

In prophetical imagery it is nothing new to predict a menacing and plundering world power as a burning mountain.

Jeremiah used the same figure to denominate Babylon at the time of the captivity.  After its’ destruction Babylon was called a “burnt mountain”.  In this text the seer describes the coming menace from the south as a burning mountain because it would not be an extinct or destroyed world power but active and full of devastating fire for a long time.

The third of creatures who died obviously means the Christians who were coerced to relinquish their holy faith.  They died a spiritual death.

The huge mass of the burning mountain tumbled into the sea throws it into such convulsions as to sink a third of the ships. This is the result of an earthquake in the bed of the seas.  Two thirds of the ships and two thirds of the living creature escape.  This peculiar grammatical construction gives a quasi=personal character to the ships that are “destroyed” as if they had life and to the creatures “that have souls.”

In the history of Christianity, these allegorical figures describe nothing with truer precision than Mohammedanism. 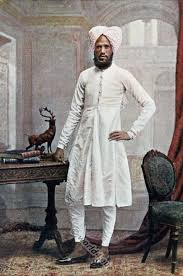 Mohammed preached an unceasing and holy war against all unbelievers who would not believe his religion.  He inaugurated a world movement and established a world power by the edge of the sword, which turned a part of the world into blood.  The motive for that bloodshed was a false religion of affected oriental fanaticism and hatred for all who not accept it.  With fire and sword he devastated the earth.

Mohammedanism was/is a religion of crude materialism;  it reduced the moral standards of its adherents to animalism.  Its’ oriental fanaticism upholds thievery, robbery and slavery against all unbelievers, and, it promises a heaven of sensual delights.  It not only brought spiritual death to the regions it conquered but a blood death to all who opposed its progress.”

As it does today.

The Second Angel of the Apocalypse sounds the trumpet. 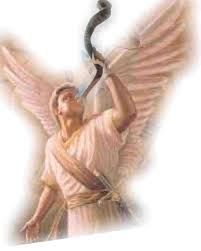