Father H. Bernard Kramer interprets the Apocalypse in ‘The Book of Destiny’ 1955

After the destruction of New Babylon (Rome) in One HOUR  in the previous verse, the merchants at sea watch the fire and smoke of the devastation weeping and mourning.

Chapter XVIII  V. 11  “And the merchants of the earth weep and mourn over her,  (New Babylon/Rome) burning because no one buyeth their cargo anymore;  a cargo of gold and silver and of precious 12. stones and of pearls and of fine linen and of purple and of scarlet;  all manner of scented wood, and all manner of work in ivory, and all manner of work in costly wood, and in bronze and iron and marble;  cinnamon and balsom and incense and myrrh,12 . frankincense and wine and fine flour and oil and wheat and cattle and sheep, with horses and carriages and slaves – and SOULS OF MEN”

Father K:  “The business men in antichrist’s empire next take up the hymn of mourning.  All they regret is the loss of their profitable trade.  The excess profits they realized out of their activities of luxury enabled them to lead a voluptuous life.  That prosperity came to an end as suddenly as it flared up.  And these merchants shall suffer heavy losses because no one will buy their goods any more.  They have no regrets for the death of the city’s inhabitants.

The text does not indicate that any deep symbolic meaning is attached to any of the articles of trade mentioned.  These were all costly luxuries in Roman times bought and used by the wealthy.  All express elegance and pomp.”

Except for the last.

“The last item of sale mentioned … the souls of men … suggests that there shall be a horrifying white-slave traffic in the world of antichrist promoted by the wicked merchants.”   Father H. Bernard Kramer  1955 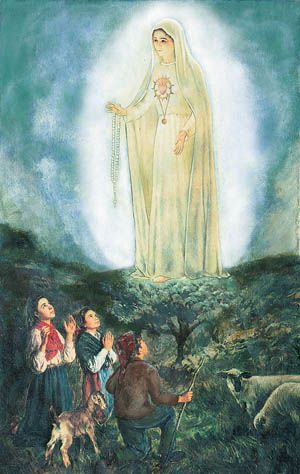 Dear Lady of Fatima, Save Our Children We Pray!