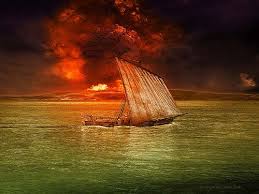 Chapter XVIII  V. 4-9 Father Kramer prophesies a nuclear destruction for only that could destroy Rome in one hour.  God warns his faithful people to get out of the city.

“And I heard another voice out of heaven saying “Come out of her my people in order that ye share not in her sins and partake of her plagues for her sins are heaped up to heaven and God hath remembered her iniquities.”

Father K:  “The sins of new Babylon (Rome) have grown to such enormities that they cry for vengeance before the throne of God.  There shall be Catholics in the doomed city up to the day of her destruction.  They are warned by their pastor.  As God sent angels to lead Lot out of Sodom, and as He warned the Jews to flee from ancient Babylon  (Jer.  LI. 6;  Zach. II. 6-8)  so He warns the true believers to depart lest they be punished with the city before the sentence is executed. 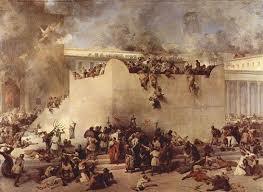 “Render to her even as herself hath rendered and give her double according to her works;  in the cup which she hath mixed, mix for her as much again;  as much as she has glorified herself and wantoned in luxury, so much give her of torment and mourning.  Because she sayeth in her heart, “A queen I sit, no widow am I, and, mourning I shall not see.  Therefore in one day her plagues shall come, death and mourning and famine.  With fire she shall be consumed;  for the Lord God is strong, who judgeth her. ” (she shall receive double punishment)

“The kings of the earth who committed fornication and wantoned in luxury with her shall weep and wail over her, when they see the smoke of her burning.  They shall stand afar off through the fear of her torment,  and shall say:  Woe Woe, the great city Babylon the strong city, in one hour shall they judgment come.”

Father K:  “If the city is annihilated in one day, famine would not set in.  Yet if all business is broken off during the plagues and not resumed, famine might have begun before the day of doom.  Flight shall not be possible because in ONE HOUR the city shall be a heap of smoking ruins.  Atomic bombs  (1955 writing)  dropped by a powerful air squadron could annihilate any modern city in so short a time and kill every living soul within it.  At the time these revelations were written it seemed a sheer impossibility for the military forces of ten kings to annihilate a city like Rome of four million inhabitants in one day, or rather, in ONE hour.

This thought would arise in the mind of the reader, and, therefore St. John adds the reason why it is possible -because God the Judge is ALMIGHTY.

They have thought, spoken and lived their scorn of God, and therefore their almighty Creator shall let them be crushed in their pride.” 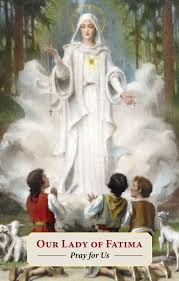 One thought on “Apocalypse tells of Rome/New Babylon Being Destroyed in One Hour: The Merchants Mourn At The Smoke of Burning”