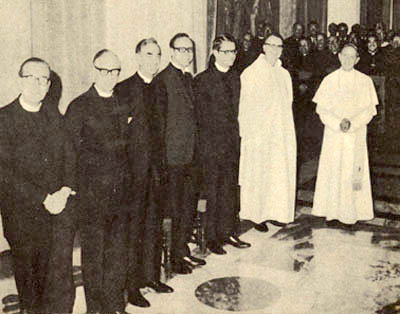 Liturgical Reform, having as one of its basic principles the abolition of all mystical acts and formulations, insists upon the use of modern languages for the divine service.

Hatred for the Latin languge is inborn in the heart of all enemies of Rome.

They recognize it as the bond that unites Catholics throughout the world, as the arsenal of orthodoxy against all the subleties of the sectarian spirit.

They consider it the most powerful arm of the Papacy

Protestantism is well on its’ way to victory should it ever succeed in destroying the use of the Latin language.

Exposed to a profane gaze, like a virgin who has been violated, from that  moment on the liturgy has lost much of its sacred character, and very soon people find that it is not worthwhile putting aside one’s work or pleasure in order to go and listen to what is being said in the way one speaks in the marketplace.

Henry the Eighth – ‘Defender of the Faith’