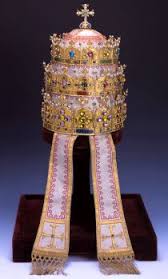 On December 8, 1854, having spent all of his holy life – his boyhood, his priesthood, as Bishop, Cardinal and Pope – at the feet of the Mother of God, John Mary Mastai Ferretti,  Pope Pius IX,  having deeply considered also in his exile at Gaeta the earnest petitions of Catholics all over the world in its behalf,  defined ex cathedra the dogma of the Immaculate Conception of the Blessed Virgin Mary.  Under a blue Roman sky, before one hundred and seventy Bishops and numerous pilgrims from the ends of the earth, he proclaimed the defining words.

The voice of the Sovereign Pontiff broke and tears filled his eyes as he paused before uttering the infallible words:

“We declare, pronounce and define that the doctrine which holds that the Blessed Virgin Mary, at the first instant of her conception, by a singular privilege and grace of the Omnipotent God, in virtue of the merits of Jesus Christ, the Saviour of mankind, was preserved immaculate from all stain of original sin. This has been revealed by God.   Therefore it should firmly and constantly be believed by all the faithful. ”

As the Holy Father finished speaking, the cannon of the Castle of Sant’Angelo boomed and the bells of the basillicas and churches of Rome rang out proclaiming the glorious news which ushered in the age of Mary.