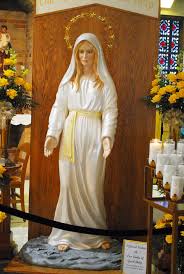 Most Rev. David Laurin Ricken, D.D., J.C.L By the Grace of God and the Authority of the Apostolic See Bishop of Green Bay

“For over one hundred fifty-one years, a continuous flow of the faithful has come to Champion, Wisconsin to pray, to seek solace and comfort in times of trouble and to petition Our Lord Jesus Christ through the powerful intercession of Our Lady of Good Help.

Incessant prayer has gone up in this place based upon the word of a young Belgian immigrant woman, Adele Brise, who in October 1859 said that the Blessed Mother, a Lady clothed in dazzling white, had appeared to her on this site.

The Lady was elevated slightly in a bright light and gave words of solace and comfort and a bold and challenging mission for the young immigrant woman. The Lady gave her a two-fold mission of prayer for the conversion of sinners and of catachesis.

Gather the children in this wild country and teach them what they should know for salvation. Teach them their Catechism, how to sign themselves with the sign of the Cross, and, how to approach the Sacraments. That is what I wish you to do. Go and fear nothing, I will help you.’

Adele Brise began immediately to fulfill the mandate and mission entrusted to her by the Lady and often times, at great personal sacrifice, went to the homes of the children to instruct them in the largely unsettled and forested area in Wisconsin. Adele was ever obedient to the authorities of the Church and steadfast in the mission entrusted to her by Our Lady, no matter what difficulty she encountered.

The mission given her became such a commitment that she set up a Catholic school of instruction for children and even began a community of Third Order Franciscan women, who assisted her in her obedience to the mandate of Our Lady to pray for the conversion of sinners and to instruct the children.

A long tradition of oral and some documented sources recounting answered prayers at the Shrine of Our Lady of Good Help include conversions and many physical healings attributed to Our Blessed Mother’s intercession. Many physical healings are memorialized by the multitude of crutches and other mementos of thanksgiving for answered prayers left at the Shrine. Prayers for physical healing are answered even to this day through the intercession of Our Lady of Good Help. Though none of these favors have been officially declared a miracle by the Church, they are clear evidence of spiritual fruitfulness in the history of devotion to the Blessed Virgin Mary at the Shrine.

Graces have been poured out through the sacraments celebrated in this place especially through the celebration of the Mass and the Sacrament of Reconciliation, as well as through the recitation of public devotions and private prayers.

Our Lady has lessened or relieved the burdens of the People of God, whether about financial, familial, relationship, or, employment matters … or even through diminishing inclement and tempestuous weather.

This holy place was preserved from the infamous Peshtigo fire of 1871, when many of the faithful gathered here with Adele and prayed through the intercession of Our Lady of Good Help, with the result that the fire that devastated everything in its wake in this entire area stopped when it reached the parameters of the Shrine.”
__________________________
The Peshtigo Fire
The Peshtigo Fire occurred on the same day as the great Chicago
fire. It is not as well know only due to lack of communications
of the times. It was the largest and deadliest fire in Americas
history.

It burned from southwest to northeast up both sides
of the Bay. It was a wildfire of immense proportions with
hurricane winds and temperatures of 2000 degrees. Some
historians say there were ‘tornadoes of fire.’ Farm Houses are
reported to have blown up. The smoke, the fire, the poisoned
air and the flying debris destroyed 1000 acres and killed 2,500
people. A dozen communities were incinerated.

The Chapel of Our Lady of Good Help was spared. As the fire bore
down upon them, the Sisters were praying the Rosary. Many families
had fled to the shrine which was encircled by a wooden fence. They
walked around the little chapel carrying a statue of Mary on high.
They prayed through the night, and, as the flames approached them,
dropping hot cinders and sparks in its advancing path, carried by
the driving winds, everything stopped. Right at the fence.
In the morning, they found farm animals inside the fence. Pieces
of the charred fence can be seen today at Our Lady of Good Help
Shrine museum in Champion. Editor
_________________________

“There is clear testimony to the upright character of Adele Brise, her devotion to Jesus Christ and the Blessed Virgin Mary, and her unwavering commitment to the mission Mary entrusted to her. Moreover, the uninterrupted history of faith and devotion testifies to the spiritual fruits bestowed upon the pilgrims to the Shrine.

Three Marian experts have studied the history of this alleged apparition and all of the extant documents, letters, and written testimonies in order to determine whether or not there are inherent contradictions or objections to the veracity of the testimony given by Adele Brise with regard to the events of 1959 and to establish whether or not there is enough evidence to suggest that the events which happened to Adele Brise may be of a supernatural origin.

The accounts of the apparitions and locutions are judged to be free from doctrinal error and consistent with the Catholic faith.

There is nothing in the person and character of Adele Brise that would question the veracity of the substance of her account. In fact, her personal character is a major factor in favor of the recognition of the apparition.

Objections concerning whether there was enough evidence to support a judgment in favor of the supernatural character of the events were thoroughly investigated and answered by the experts. The documents from the early history of the Shrine are not abundant, due primarily to the fact that Green Bay at the time of the apparition was frontier country. One of the experts affirmed that any lack of information does “not invalidate the overall impression of coherence between event and consequences, personality of the seer and commitment to the mission received, the comparability between this even and similar recognized apparitions and challenges of the historical context and responses given.”

GIVEN THAT
These simple apparitions and locutions given to Adele Brise became such a compelling theological and religious mission for her. The effects of these endeavors by her and many others have lasted these many years with such major spiritual benefit to so any people

Many of the local clergy and clergy from other Dioceses and Religious Institutes have come here on pilgrimage with their people, also with spiritual benefit.

It remains to me now, the Twelfth Bishop of the Diocese of Green Bay and the lowliest of the servants of Mary, to declare with moral certainty and in accord with the norms of the Church:

THAT THE EVENTS, APPARITIONS AND LOCUTIONS GIVEN TO ADELE BRISE IN OCTOBER OF 1859 DO EXHIBIT THE SUBSTANCE OF SUPERNATURAL CHARACTER, AND I DO HEREBY APPROVE THESE APPARITIONS AS WORTHY OF BELIEF (ALTHOUGH NOT OBLIGATORY) BY THE CHRISTIAN FAITHFUL.

I encourage the faithful to frequent this holy place as a place of solace and answered prayer.

Give at the Shrine of Our Lady of Good Help, Champion, Wisconsin, the eighth day of December in the year of Our Lord two thousand and ten, the Solemnity of the Immaculate Conception of the Blessed Virgin Mary.